The Orgins of Pita Bread

Pita has been a staple of the Middle East for 4,000 years. Bread was of central importance in ancient societies. The earliest-known written records and recipes of bread-making originate in the Mediterranean, where pita-like flatbreads cooked in a clay oven called a tinûru (tannur or tandoor) were a basic element of the diet.

Pita is not just a bread. It is used as utensils (a spoon, bowl, a wrap or a pocket) as well.  Imagine not having to remember a fork or spoon, just pick up your food with your pita, and it’s soaks up all of the yummy flavors the food you are eating, bonus! 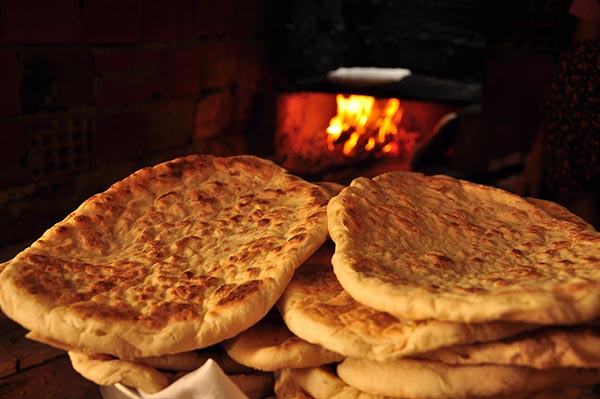 Originally pita was made as a combination of dough that was let to sit and collect yeast and fresh dough, until it was discovered that brewers yeast works. Fun fact: In the Middle East, it is still often made in a backyard stove compared to the store-bought pitas that have spread all over the globe.

Most pita are baked at high temperatures (450–475 °F). The high heat allows the water in the dough to turn into steam, thus causing the pita to puff up and form a pocket. When it is removed from the oven, the layers of baked dough remain separated inside the deflated pita. This allows the bread to be opened to form a pocket. Sometimes pita is baked without pockets and is called “pocket-less pita”.

Pitas are frequently used as the bread of choice for lamb, steak, falafel, and chicken. It is traditionally accompanied by hummus, baba ganoush, tzatziki, or tabouleh. These are only some of the foods that are historically eaten with pitas. Recently, people have started experimenting with different recipes that pair pitas with avocados and eggplants. Pita chips have also become very popular, a baked or fried brittle chip made from pita bread, can be eaten with nearly every dip imaginable.

Pita is good source of fiber and protein, with minimal fat, few breads are as nutritious as a whole wheat pita. It has barely any sugar and is a source of calcium. One pita normally has less calories than two slices of bread.